Vesta: The Fires of Rome

Hey all!  I hope you had a fantastic weekend!

This is somewhat off-topic for this blog, but I stumbled across a fantastic short science-fiction story today called The Governess with a Mechanical Womb, by Leena Likitalo.  It's a haunting story that I think will stick with me for some time.  If you're a sci-fi fan, I hugely recommend it.  You can read the whole thing here.

One of my favorite gods in the Greek pantheon is Hestia, the goddess of hearth and home.  If you didn't read my post about her, Hestia is a rarely mentioned deity in the Greek myths who is nonetheless powerful enough to stand up to the gods.  She ruled over the hearth and the home, which sounds innocuous but was incredibly important. 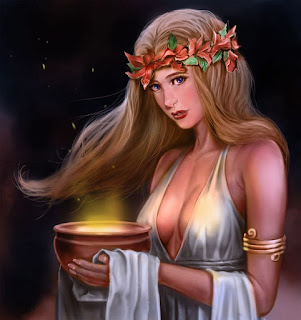 Vesta is essentially Hestia made even more powerful.

I've mentioned that honor and duty were incredibly important to the Romans.  So too was home - in fact, those three were inexplicably intertwined, with a sense of duty to home, whose family's honor was to be preserved.

I'm doing a very lousy job of explaining this, but home was even more important to the Romans than it was to the Greeks.  The way they viewed home was also rather different.  Rome itself was viewed as the ultimate home, to which every person belonged.  Duty came first and foremost to Rome, and then to an individual's house. 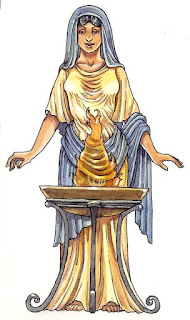 Much like her Greek counterpart, Vesta was represented by the hearth fire of every home.  One such fire was kept going at a temple in Rome, and was not extinguished all year.  Every year in March the fire was rekindled, and it was serviced all year long to keep the blaze going in honor of the goddess.  So long as it burned, Vesta was thought to be protecting Rome.

This fire was tended to by a group called the Vestal Virgins.  Vesta herself was a virgin goddess, and so any women who were sworn to her servitude were to be virgins as well.  It was a very powerful position for a woman to have, but the consequences could be deadly if they went back on their oaths.  A woman found to have lost her virginity while a servant of Vesta could be buried alive as punishment.

One famous Vestal Virgin was Rhea Silvia, the mother of Romulus and Remus - another way in which the two men were tied to the deities of Rome.

Now, Vesta is often represented in mythology as an unimportant, domestically centered goddess.  After all, her domain was the fireplace - a place around which cooking was done, meals were eaten, and family time was spent.  How powerful could such a goddess truly be?  Isn't she more of a deity for women? 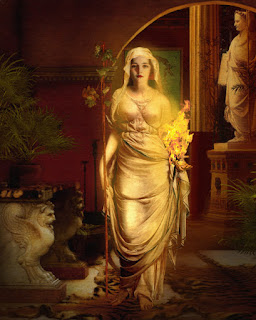 Let me clear this up for you:  everyone in Rome worshipped Vesta.  I do mean everyone.  One of the most famous characters in Roman literature is Aeneas, hero of the Aenead.  Aeneas is one of the great heroes of Roman history/mythology - he is the ancestor of Romulus and Remus, one of the survivors of the battle of Troy.  He has been called the Roman equivalent of Odysseus and Achilles.

A male, a strong, virile warrior, prayed to the goddess many think of as being domestic.

I'll end with a quote from one of my source books, which also refers to Vesta as a guardian deity of the Roman state:

"...this goddess of the family hearth-fire was adopted as guardian of the holy fire in the city of Rome...the holy fire of Vesta was the hearth-fire of the city and, indeed of the Empire.  Eventually temples in her honour, containing her undying fire, were set up in cities throughout the Roman world.  If the fire ever went out the Romans recognized it as a very serious portent and expected disaster to follow, for her cult came to symbolize the undying power of Rome."

Take care, and I'll see you guys next week!
Posted by MythDancer at 12:31 PM

Temporarily on hiatus; will return early 2018.

Natasha Cover is a mythology enthusiast and a published author. This blog is dedicated to discussing mythology, fairy tales, and folklore.